For centuries the islanders of Lewis, Harris, Uist and Barra have woven the magical cloth the world knows as Harris Tweed, Clo Mhor
in the original Gaelic- ‘The big cloth’.

From time immemorial, the inhabitants of the West of Scotland, including the Outer Hebrides had made cloth entirely by hand. As the Industrial Revolution reached Scotland, the mainland turned to mechanisation but the Outer Islands retained their traditional processes. Lewis and Harris had long been known for the excellence of the weaving done there, but up to the middle of the nineteenth century, the cloth was produced mainly for home use or for a purely local market.

In 1846, Lady Dunmore, widow of the late Earl of Dunmore, had the Murray tartan copied by Harris weavers in tweed. This proved so successful that Lady Dunmore devoted much time and thought to marketing the tweed to her friends and then to improving the process of production. This was the beginning of the Harris Tweed industry. At that time the method of making this handmade was as follows:

The raw material, wool, was produced locally and part of it would have been used in its natural uncoloured state, the rest was dyed. In the 19th century vegetable dyes were used. Following dyeing, the wool was mixed, the shade being regulated by the amount of coloured wool added; then it was oiled and teased; the latter process involves pulling the wool apart to open out the fibres. The next part of the preparation, carding, results in the fibres of the wool being drawn out preparatory to spinning. This was a very lengthy process followed by spinning carried out on familiar spinning-wheel by women. Until the turn of the century a very early type of handloom was used for weaving with a manually operated shuttle. The final process is finishing where the tweed is washed and given a raised compact finish. The involved in this process was often accompanied by songs in Gaelic.

As a result of the marketing efforts of Lady Dunmore, increased sales of the tweed were achieved and trade was established with cloth merchants in large towns in the UK.

At about the turn of the century the primitive small loom was replaced by the improved “fly-shuttle” loom. This was made of wood and heavier than the earlier loom tending to make weaving an occupation for men rather than women. Although originally imported from the Galashiels a local joiner started making the new type of loom in 1903.

Between 1903 and 1906 the tweed making industry in Lewis increased rapidly. Mr Aeneas Mackenzie’s carding mill in Stornoway added spinning machinery and a second mill was started by Mr Kenneth Mackenzie from whom one of the largest Harris Tweed producing companies in existence takes its name today.

At a meeting in Stornoway in 1906 efforts were considered for placing the industry on a more satisfactory footing. This was a most harmonious meeting and as the Trade Marks Act had been passed in 1905 making provision for a registration of Standardisation Marks, it seemed to be novel opportunity to end the increasing practice of offering mill-spun tweed as genuine Harris Tweed.

This meant the introduction of a system of whereby the tweed was inspected and, if passed, given a certifying stamp which would give confidence to the trade and public. A company limited by guarantee was formed under the title The Harris Tweed Association Limited. This was mainly to ensure the grant of a mark and an application was filed to register the well-known Harris Tweed Trade mark consisting of the orb and the Maltese Cross with the words Harris Tweed underneath. One of the objectives of obtaining a Mark was to protect the industry from the competition of the spinning mills.

The original definition read,”Harris Tweed means a tweed, hand-spun, hand-woven and dyed by the crofters and cottars in the Outer Hebrides”.

The Certification Mark was granted in 1909, registered in 1910 and stamping began in 1911. Amended Regulations were confirmed in June 1934 and the following was promulgated, “Harris Tweed means a tweed made from pure virgin wool produced in Scotland, spun, dyed and finished in Outer Hebrides and hand-woven by the islanders at their own homes in the Islands of Lewis , Harris, Uist, Barra and their several purtenances and all known as the Outer Hebrides”.

There could be added in legible characters to the Trade Mark, the words “Woven in Lewis”, “Woven in Harris”, “Woven in Uist” or “Woven in Barra” for the purpose of distinguishing where the tweed was made”.

The alteration in the Trademark Definition in 1934, allowing the use of millspun yarn, enabled the industry to make a huge leap in production. The stamped yardage increased tenfold and continued to increase till the peak figure of 7.6 million yards was reached in 1966.

The Hattersley single width loom The introduction of the Hattersley domestic loom in the 1920s enabled the weavers to produce more and to weave complicated patterns that could not be woven on the large wooden looms that were used for the previous 50 years.

This loom was brought to the islands by Lord Leverhulme who owned Lewis and Harris for some years and introduced many changes with mixed results.

The Hattersley loom is still used in the industry but is being replaced by the new Bonas-Griffith double width loom which was introduced in 1996 to satisfy market demands for wider, softer, lighter Harris Tweed. The Harris Tweed Association was the proprietor of the famous “Orb” Trademark. Throughout this century the HTA protected and promoted the Orb all over the world. The success of the industry meant that competitors tried to imitate Harris Tweed or pass off other fabrics as genuine. Much of the competition was from mainland Scotland and this led to a case at the Court of Session in 1964 that was, for a long time, the longest civil case in Scottish legal history. The judgement by Lord Hunter re-inforced the 1934 definition that tied all production processes to the Outer Hebrides and removed the threat of mainland competition. The years following the 1964 case were the most successful ever for Harris Tweed but, by the late 1980s the industry had begun to contract as fashions changed and the Harris Tweed jacket became less popular. The industry set out to transform itself by:

producing a new double width loom
re-training weavers
introducing new, tougher Standards
marketing the new wider, softer, lighter tweed.
The Harris Tweed Authority took over from the Harris Tweed Association in 1993 by Act of Parliament. Thus the definition of Harris Tweed became statutory and forever tied the cloth to the Islands:
Harris Tweed means a tweed which has been hand woven by the islanders at their homes in the Outer Hebrides, finished in the islands of Harris, Lewis, North Uist, Benbecula, South Uist and Barra and their several purtenances (The Outer Hebrides) and made from pure virgin wool dyed and spun in the Outer Hebrides.
The late 90s are a difficult time for the British textile industry and Harris Tweed is no exception. However there is confidence that the hard decisions taken to reform the industry will eventually bear fruit and secure the future of this unique product. 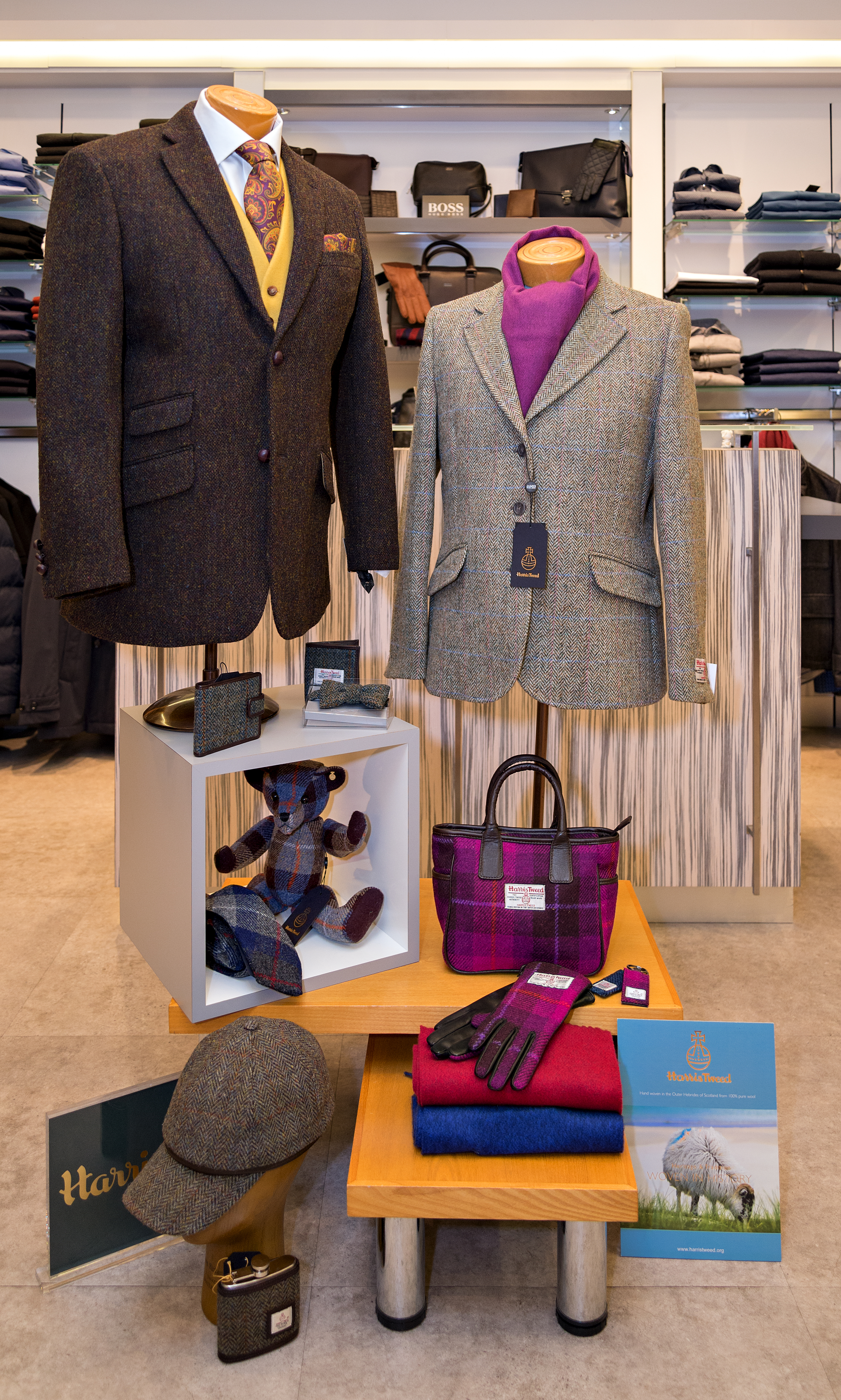 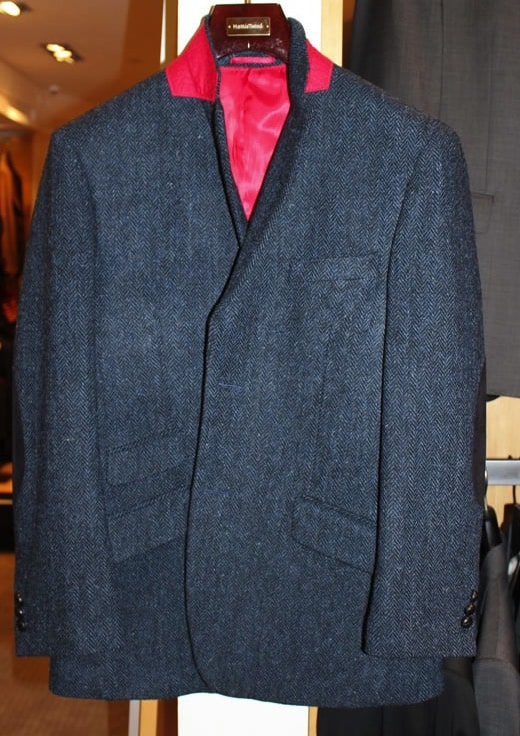 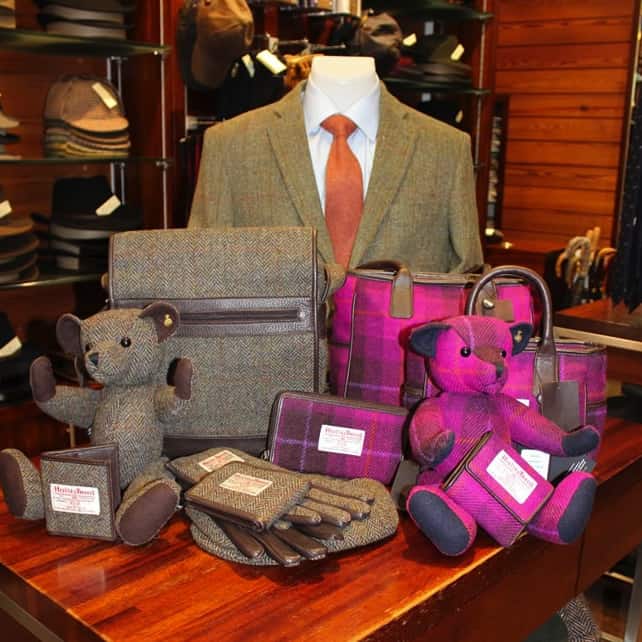 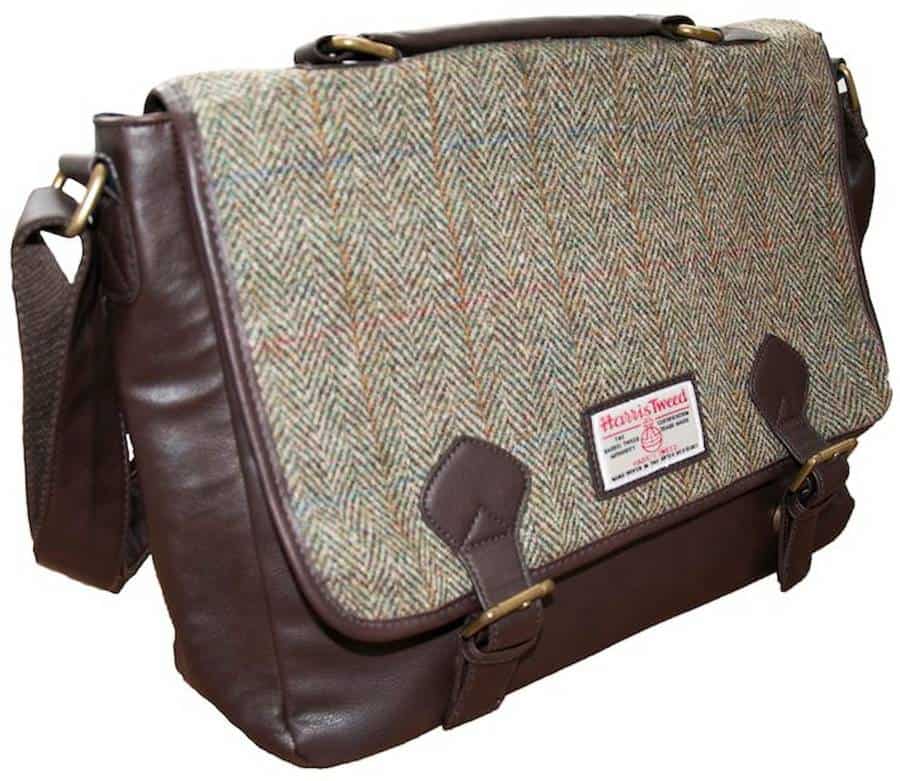 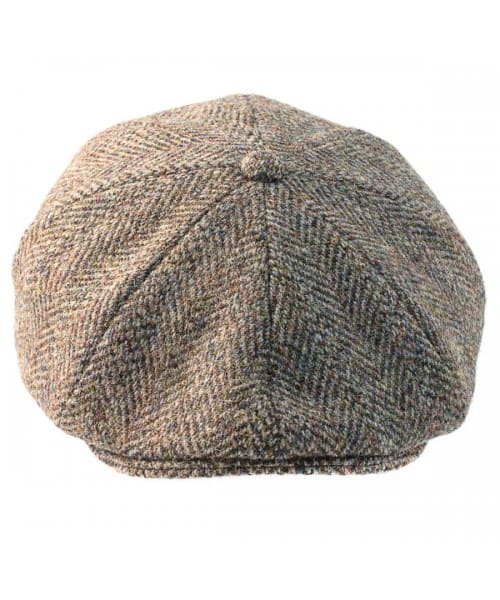 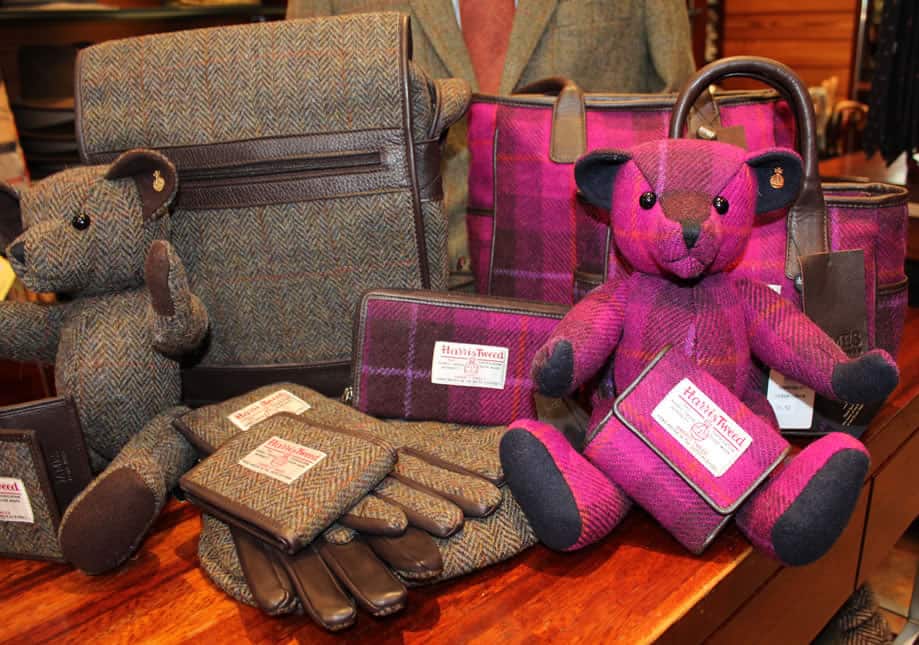 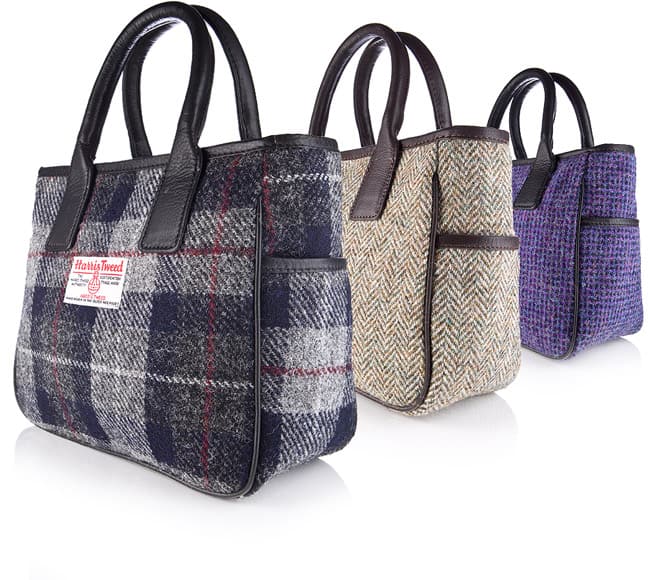 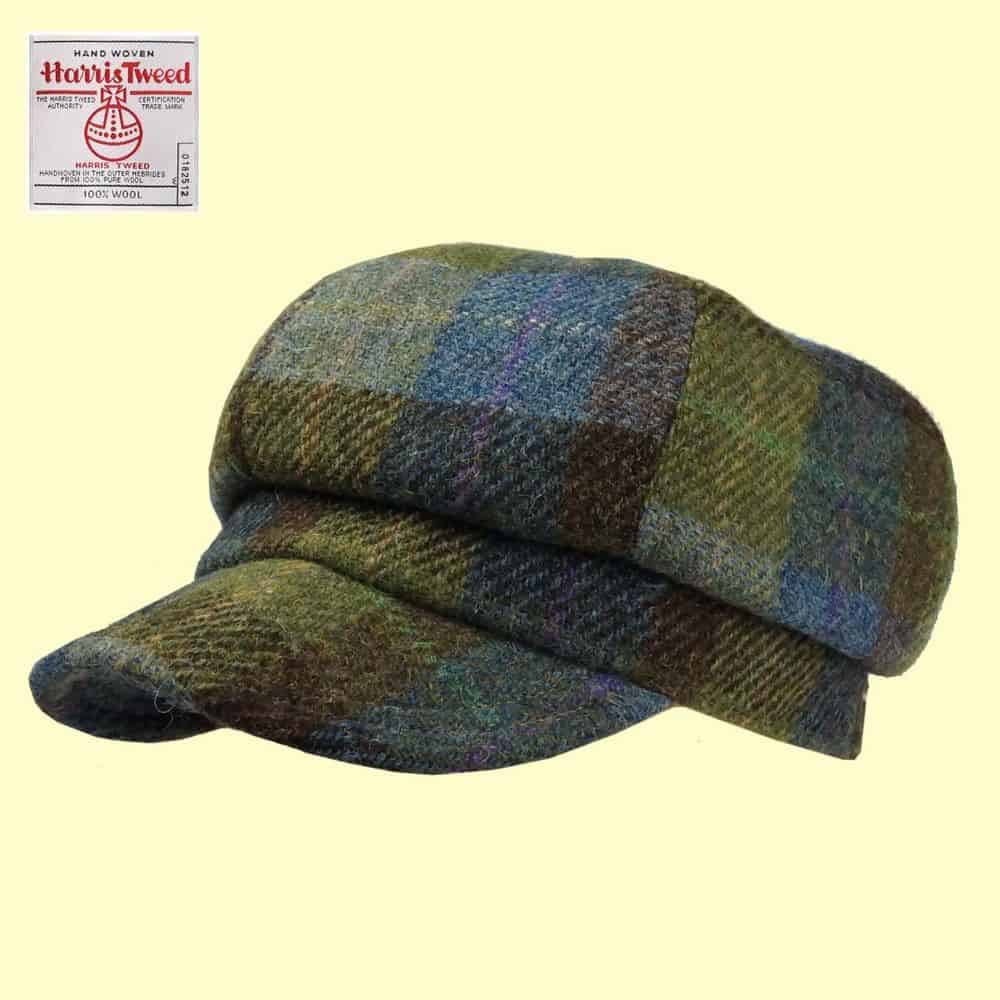